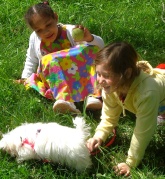 WASHINGTON and BERLIN – After over 20 years the USA (along with Somalia) is the only country in the world (193) where children human rights are NOT legally and internationally recognized through the United Nations Convention on the Rights of the Child (UNCRC). All children who are on U.S. soil loose their basic human rights that they have in 193 other countries.

Now is the time to change this silent violation of children’s human rights before the 2012 Presidential elections. “Change will not come if we wait for some other person or some other time. We are the ones we’ve been waiting for. We are the change that we seek.” Obama, February 2008 The Little Peace Ambassador, Ariana-Leilani, 9 years old, was destined to promote peace and children’s human rights worldwide. She was born a dual German – USA citizen with two nationalities, cultures, races, religions, and three languages.

“We lose ourselves when we compromise the very ideals that we fight to defend. And we honor those ideals by upholding them not when it’s easy, but when it is hard.” Obama, Nobel Lecture,December 2009 Before 5 years she had traveled to ten countries and volunteered to help orphaned children she called “friends.” The Little Peace Ambassador, met President George W. Bush, Archbishop Desmond Tutu, Queen Noor at the United Nations in NY, and was named after the “Ariana” museum at the United Nations – Palais de Nations in Geneva, Switzerland, where she once ran the halls at the World Health Assembly.

Yet, for such an unusual start in life, since the age of 5, the Little Peace Ambassador has been trapped in Washington, DC, USA now fighting for her life.

As a direct result of no UNCRC, Ariana-Leilani has suffered silently for 4 years in the USA with untreated life-threatening Severe Chronic Neutropenia only minutes from The White House, in the most powerful and internationally involved foreign policy and human rights defender governments in the world. In Germany she would have the basic human right to live.

In the USA, she is denied life-saving medicine (nupogen), free since she is on the Severe Chronic Neutropenia International Registry (SCNIR); a full toxicology and expert medical care. A ”gopetition” to President Obama and Chancellor Merkel to “Save Ariana-Leilani” currently has signatures from 117 countries.

“All of us share this world for but a brief moment in time. The question is whether we spend that time focused on what pushes us apart or whether we commit ourselves to an effort, a sustained effort to find common ground, to focus on the future we seek for our children and to respect the dignity of all human beings.” Obama, speech, June 2009 Little Peace Ambassador, Ariana-Leilani, “Happy 9th Birthday.”

May you live a long life and continue to educate and advocate for Children’s Human Rights in the USA and worldwide.

and link for video UNCRC Video Dr. Ariel Rosita King On the Human Rights for Children in the USA http://www.youtube.com/watch?v=8-XCoHEXVlM